Spectrum sharing update from the University of Strathclyde

When we were at the Telecom Infra Project (TIP) event back in October, we demonstrated our shared spectrum 5G base station.

This was operating in the 700MHz TV Whitespace (TVWS) band, which is still available for licence-exempt use in certain parts of the UK. The radio contacts a spectrum database at regular intervals to find out what frequencies and transmit powers it is allowed to use at any point in time. 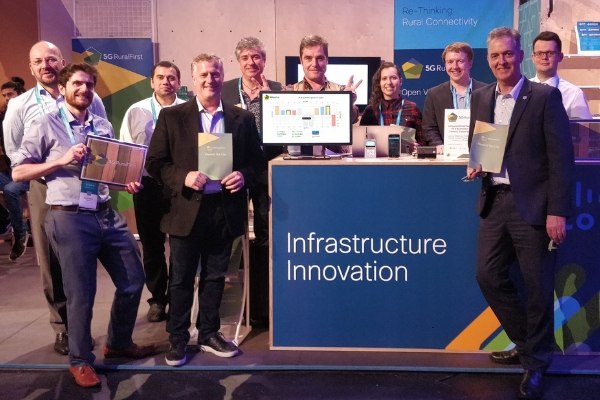 We are using similar technology in the 5G radio network that we are building on Orkney.

Radio spectrum is a finite but non-depleting resource, and getting access to this spectrum has traditionally been costly and complex.  If there is no service in a very remote area, it is generally not affordable nor easy for a rural community to access suitable hardware or spectrum licences to operate its own community cellular network. We also find that spectrum for mobile radio is traditionally licensed on a UK wide national basis; and licence-holders are granted exclusive use of the spectrum across the entire land-mass of the country. In rural and remote areas, however, this spectrum often lies unused, because there is no business case to justify the cost of deploying commercial networks in these more sparsely populated locations.  Hence this ‘rural’  spectrum may be underutilised, while at the same time, users in these areas are without mobile coverage. With the new 5G software defined radio technologies and spectrum sharing methods being developed at the University of Strathclyde, we are working with partners to make it possible for rural communities to consider building their own networks to access a wide range of available frequencies without interfering with any services from a primary licensed network operator, in order to deliver rural coverage on a local basis to their own residents.

In the last few weeks, regulators from around the world have been announcing plans to release new licence-exempt spectrum bands:

You may have seen via Twitter last week that David Crawford (one of the 5G RuralFirst leads at Strathclyde and the Director of the Centre for Whitespace Communications) received a medal in recognition of contribution to the University, via his work over the last 8 years in providing affordable Internet connectivity in hard to reach rural areas with shared spectrum technologies, notably in Kenya and Malawi.

Professor of Signal Processing and Communications at University of Strathclyde